November 2017 - Precise predictions for vector-boson scattering at the LHC

The Large Hadron Collider (LHC) is the largest physics experiment in the world and is based in Geneva (Switzerland). It is colliding bits of matter at very high energy in order to produce elementary particles. These particles are numerous and each of them have different characteristics that allow them to be "seen" in different parts of the detectors built around the interaction points of the colliding beams. The task of the physicists working in particle physics is to verify if the theoretical predictions match the experimental measurements. If they don't, this might be a sign of unknown mechanisms.

The collision of two protons (the tiny bits of matter) can produce many particles in different ways and these are called processes. The processes with only two particles in the final states are easier to compute with high precision than theones with high multiplicity. On the experimental side, the processes with low multiplicity happen more often and are thus measured more precisely due to higher statistics. On the other hand, processes with high multiplicity are more difficult to compute theoretically and are also more complex to see experimentally. In order to accumulate enough statistics one should then wait longer and collide protons at higher energy. 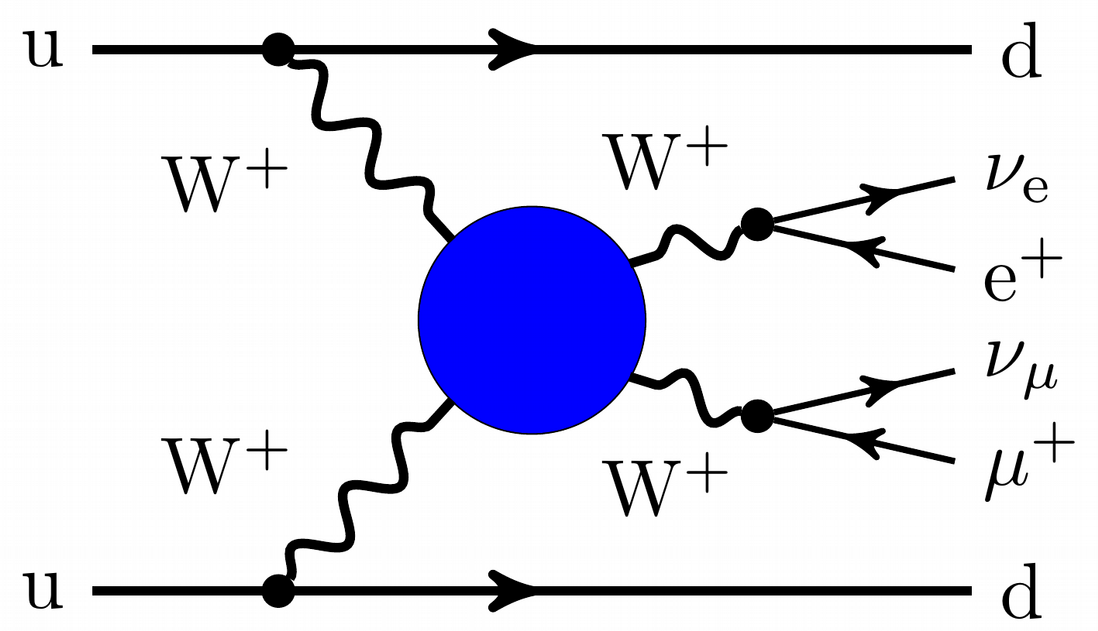 The latter is actually happening at the LHC where now protons are collided at a centre-of-mass energy of 13 TeV. This has never been achieved before and this means that experimental collaboration (ATLAS and CMS) are now able to measure very rare processes with up to 6 particles in the final state. Among these processes, key processes for the understanding of the Standard Model of particle physics are processes that involve the internal scattering of bosons (see Figure).

These are generically dubbed vector-boson scattering (VBS) processes and have been measured for the first time a few months ago. The study of these processes constitutes the main focus of the VBSCan COST action.

In this exciting time for particle physicists exploring these new territories, it is very important to have precise and reliable predictions for such processes. During this short term scientific mission (STSM), several theorists have gathered at the institute Nikhef in Amsterdam (the Netherlands).

This week of work has been devoted to performing comparisons of various theoretical predictions. This allows to infer whether approximations commonly used are reasonable or not and to investigate whether there are ambiguities between different predictions, especially when parton showers are used. Such a work is very important for experimental collaborations as this provides them with indications on how to use and interpret theoretical calculations with their intrinsic errors. In that way, theoretical predictions are used appropriately by experimental physicists so that they can make the most of the data of the LHC. A report to be published in a peer-reviewed jorunal is in progress and will become public in the coming months.

These were the questions, Despoina Sampsonidou from Aristotle University of Thessaloniki tackled together with scientists at the Technical University TU Dresden, visiting the Institute IKTP from November 19th to December 14th 2017. Together they concentrated on the study of the W±Z production via Vector Boson Scattering (VBS) in the ATLAS experiment.

ATLAS is one of the four major experiments at the Large Hadron Collider (LHC) at CERN. It is a general-purpose particle physics experiment run by an international collaboration and, together with CMS, is designed to exploit the full discovery potential and the huge range of physics opportunities that the LHC provides.

The VBS production is a rare but at the same time a very important set of processes that it will be possible to measure at LHC. It manifests itself as two high-energetic, well-separated jets in the detector, produced together with two vector bosons (dibosons). So in the final state of the event, apart from the the two jets, the decay products of the two vector bosons are present and can be used to select the signal events instead of uninteresting background.

The study of such states may provide evidence for the existence of New Physics, which will manifest itself at energies higher than the ones available in the LHC collisions currently. The 13 TeV center-of-mass energy, as well as the high luminosity in Run2 at LHC, which will continue for one more year, significantly enhances the sensitivity of these processes. Thus, it allows us to test the predictions of the Standard Model to a high precision and consequently look for deviation from it. Despoina’s visit allowed a close collaboration with the TU Dresden team in a time period crucial for the next publication.

The results of the work performed during the STSM were presented in the TU Dresden group meeting. 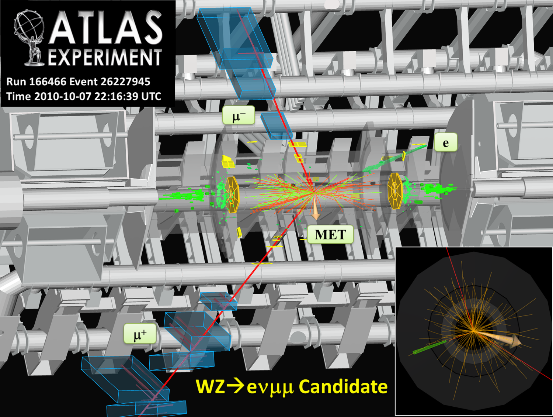 A precise measurement of the Higgs couplings to W and Z bosons is one of the aims for VBScan researchers being involved in the ATLAS experiment. They analyse processes, in which the Higgs boson is produced in the fusion of electroweak bosons (W and Z) and decays to a pair of W bosons, both of which further decay to electrons, muons and neutrinos (see picture). 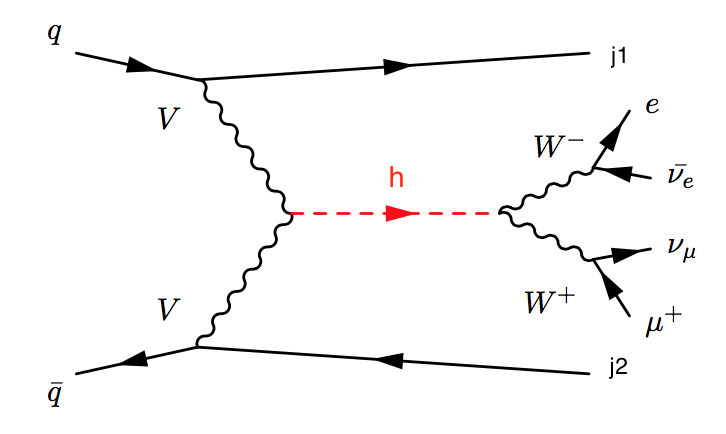 They measure individual Higgs coupling strengths to longitudinally and transversally polarised bosons. The Standard Model predicts these parameters to be equal and finely-tuned in order to restore unitarity in the scattering of electroweak W bosons (and to ensure, the universe is stable). Therefore, any observed deviations from the SM couplings allow for a direct test of the electroweak symmetry breaking mechanism. If an anomalous coupling is observed, this would hint at new physics in the interactions between the Higgs and W and Z bosons or indicate the composite nature of either the Higgs or electroweak bosons. To best measure these processes and interpret the results, the VBScan researchers prepared a toolkit for statistical analysis together with statistics experts at CERN and implemented a maximum likelihood fit for the statistical interpretation of results using morphing techniques.

Statistical analysis is a bundle of tools to determine a parameter or investigate whether a certain model or hypothesis can be confirmed or not. In short: It helps to answer our research questions - especially in cases, where our own brain might trick us or where the answer is not very clear. VBS network member Jon Butterworth has described this nicely in his Guardian blog.

In order to learn how to use statistical tools for their analysis, researchers from the TU Dresden and the Aristotle University of Thessaloniki teams met in Dresden to exchange tools and knowledge - hands-on. Sitting in front of a computer together with a cup of coffee next to you and a friendly colleague and having immediate feedback, when something does not work as you think it should!

Vector-boson scattering (VBS) processes are an ideal tool to study the nature of electroweak symmetry breaking and test the electroweak sector of the Standard Model (SM) to high precision. The non-Abelian nature of the weak interaction predicts the presence of triple and quartic interactions of electroweak gauge bosons. Measuring VBS processes and testing the theoretical predictions is one of the main motivations for the current run-2 and future runs of the Large Hadron Collider (LHC) at CERN. So far, no significant deviations from the SM predictions have been established. Hence, it is reasonable to assume that any effects from physics beyond the SM are associated with an energy scale larger than the one currently probed by experiments. Also, modelling new-physics effects should comprise a large variety of morespecific, UV-complete models. An ideal tool to perform this task are Effective Field Theories (EFTs), which provide a well motivated and consistent framework. It is an expansion in terms of higher-dimensional operators, consisting of the SM fields, with associated Wilson coefficients and corresponds to integrating out any new-physics degrees of freedom.

The meeting in Milano allowed researchers from various VBScan member states to start a comparison between different codes providing theoretical predictions for VBS processes in the framework of EFTs. This important step makes sure, that consistent results can be achieved. Implementation choices otherwise could lead to non-agreeing results when generators, important tools in aQGC determinations, are used with their default settings. Another focus of the meeting were phenomenological studies to judge the sensitivity of VBS processes.

August 2018 - Studies on the extracting longitudinal polarization through angular distributions

One of the key topics in the VBSCan COST Action is the feasibility of separation between longitudinal and transverse component of the W boson in the VBS full-leptonic channel. This channel is the most promising channel in terms of background discrimination, despite its low cross section.

Researchers from Ljubljana and and Pavia, with two PhD students taking the lead in these investigations, studied, how to extract the W boson polarization in VBS scattering. One of the investigated techniques to measure the W boson polarization includes extracting polarization fractions from the angular distribution of leptons in the W rest frame. In principle nothing is knows about the polarization of a W boson, it can only be reconstruct through the angular distributions of its decay products. The reconstruction of the W rest frame represents a challenge from experimental point of view.

Longitudinal and transverse polarization vectors depend on the reference frames in which they are defined. The polarization of a massive vector boson is the reflection of its spin–1 particle nature. The orientation of the boson spin is defined as a three–dimensional spin vector, resulting (quantum– mechanically) in three independent spin states: for each boson momentum, the spin projection along an arbitrary axis has three possible eigenvalues, 0, ±1 (helicities). In general, the polarization fractions of W bosons are frame dependent. Actually, this dependence can be more or less evident, depending on the considered process. In events generated with PHANTOM Monte Carlo framework sign ambiguity in longitudinal neutrino momentum reconstruction can be partially resolved by setting some selection criteria, this applies both to semi-leptonic and full-leptonic. The two PhD students determined thresholds for selection by visualizing in a 2d plot the number of events as a function of relative error and specific discriminating variable, such as the scalar product of the neutrino three-momentum, with the W three-momentum. 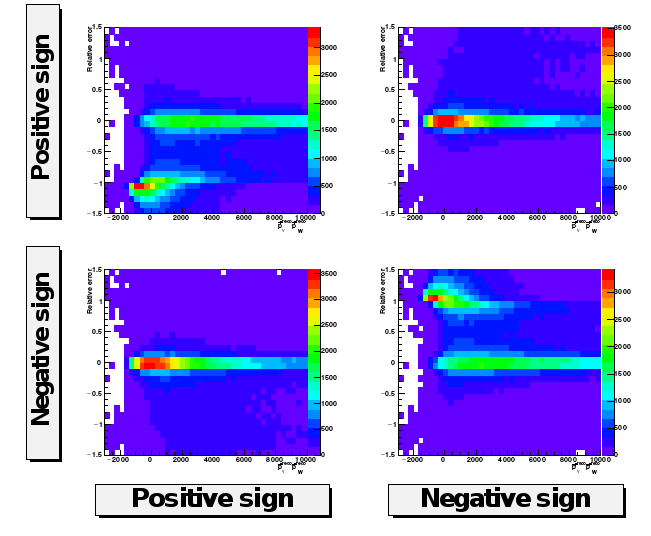 Then they evaluated the impact of the detector resolution on the full-leptonic polarized sample (transverse and longitudinal polarization). Looking at the results, it can be said that in semi-leptonic channel the reconstruction of the W reference frame can be obtained up to a sign ambiguity. The use of selection criteria represents the most promising way to select correct solution. In full-leptonic case instead the reconstruction is worse with respect to semi-leptonic case. The the effect of detector smearing, especially in the fully-leptonic channel, is sub leading.

Vector boson scattering (VBS) and vector boson fusion (VBF) are important processes to study at the Large Hadron Collider (LHC) at CERN for both the ATLAS and the CMS experiments. VBS and VBF are characterized by two high energetic jets in the forward region of the detector, produced in association with one or two vector bosons, respectively. VBS is a rare but also the key process to experimentally probe the Standard Model (SM) nature of electroweak symmetry breaking (EWSB) and the Higgs boson. Researchers from Sheffield University (UK) and Piri Reis University (Tuzla, near Istanbul) studied the of the kinematic properties of different VBS and VBF processes.

VBF Z production is an important benchmark process as it permits the study of the jet activity in a relatively large event sample. The researchers aim to identify common features in the VBS Z and other channels, mainly central and forward region jets kinematic variables such as eta, phi, mass and transverse energy, in order to determine some universal cuts.